Published on May 7, 2012 at www.ourworldtoday.com.au

In the far north of Vietnam is a quiet mountain town called Sapa. Just over the mountains that surround the village you will find China to the north and Laos to the west.

Thousands of tourists flock to Sapa each year to get away from the hustle and bustle of Vietnam’s crowded cities. Sapa offers tourists the chance to experience some of the country’s most breathtaking landscapes and get in touch with some of Vietnam’s minority cultures. 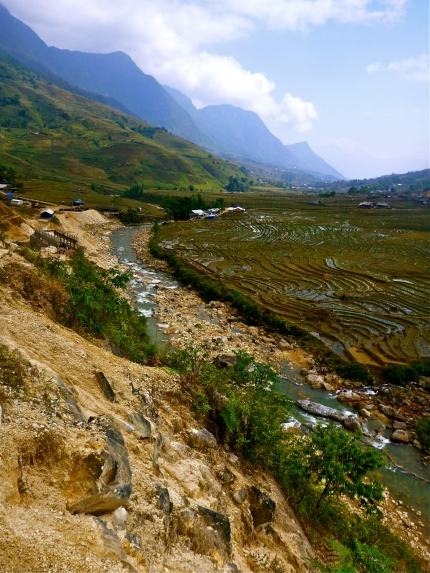 Last year I spent some time trekking through this picturesque, mountainous region with a great bunch of tourists from all walks of life. But while many tourists have travelled through Sapa, not all are aware of the plight of the women inhabiting this magnificent countryside.

The day before we left on our overnight train to Sapa, my friend and I were sitting in a small restaurant in Hanoi when we overheard some Canadian tourists who spoke negatively of their recent trip to Sapa. Concerned about what they were saying, we leaned over their table and asked if they could give us any tips about surviving in Sapa.

“Sapa is the most amazing place and the scenery is beautiful,” one of the Canadian women told us, “but the local women are pests!”

She went on to warn us not to buy anything from the local women in Sapa – or our peaceful trek would be ruined with women continually pestering us to buy their junk and trying to rip us off.

Keeping her advice in the back of our minds, we arrived in Sapa during the early hours of the morning. A mini van picked up our group – two Australian girls, two Spanish friends, a Polish couple, and a Scotsman. Our route to Sapa from Lao Cai train station consisted of a bumpy ride as we travelled through the mountains and stared in amazement at the valley below us. As we drove through Sapa we could see the mist weaving through the town as if it were something from a scary movie. 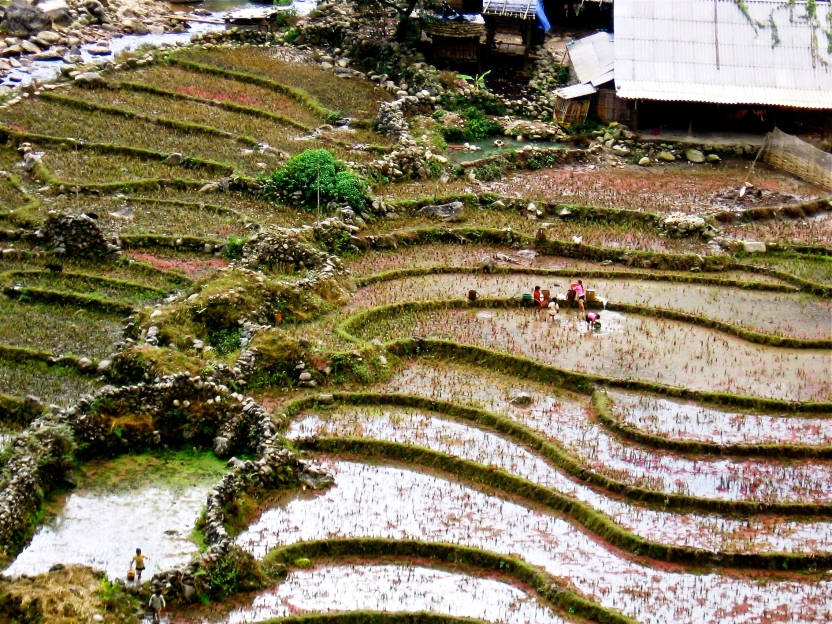 As our mini van pulled up at our destination, the local women we had heard so much
about instantly surrounded our van like a swarm of flies. Our driver beeped his horn a few times to get the women to move out of the way so he could park but their curious, excited eyes still peeked at us through the windows. We hadn’t even stepped foot out of the van before some women were tapping on the windows and holding up their scarves and jewellery for us to buy. It was as if we had dollar signs painted on our foreheads. I was horrified. I looked at my friend and sunk into my seat … this was not my idea of a peaceful trek in the countryside.

A few hours passed while our group washed up, had breakfast, played card games and got to know each other as we waited for our guide to arrive at the hotel. All the while, about 15 local women were waiting patiently for us out the front of the hotel and watching us through the windows. We quickly learned to ignore them.

The time finally came when our guide, Zi, arrived. We took one step out the door of the hotel and the women crowded around us.

The women followed our group through the entire village trying to sell us their things but most of us ignored them as they asked our names, our age, and whether we had any brothers. That was pretty much the only English they knew. I can’t even begin to count how many times we all answered those questions throughout the trek. 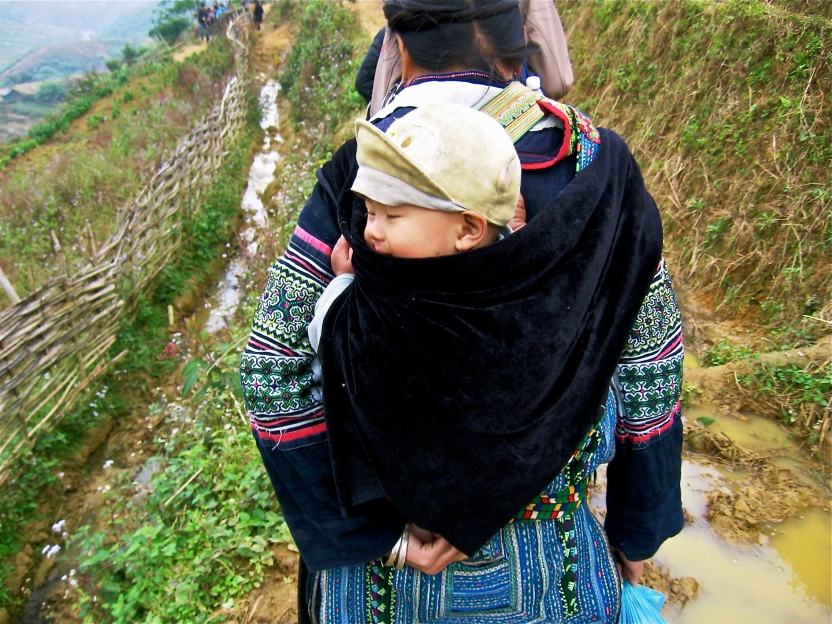 We reached the end of the township and started heading into the forest. We all assumed the women would head back into the centre of the town and leave us alone now. To our surprise the women – some elderly – followed us up and down the mountains and through the muddy and rocky terrain. Some of the younger women had babies strapped to their backs and the women were dressed from head to toe in their heavy, traditional, colourful clothing. Most of them carried their goods with them in a tall, weaved basket strapped around their backs.

The women divided themselves among all the tourists and offered to hold our hands for support as we hiked up and down the mountains. One local woman saved my friend from falling on so many occasions that by the end of the trek she felt obliged to buy something from her. But each time a local woman offered to help me I always refused. I didn’t want to get sucked in to feeling obliged to give anyone money.

The first day of the trek nobody bought a single thing from those women. They persisted and we continually resisted. Every time the tourists stopped for a rest the local women would take the materials out of their baskets and quickly start weaving together bracelets and other hand-made goods with the hope of selling them to us.

It was that night, during a conversation with our young guide that our attitudes towards these ‘pests’ changed.

Zi told us that the women only started following tourists on the trek after they were banned from selling to tourists on the streets in the Sapa township, in the Government’s attempt to get rid of street trade. Zi said local police sometimes beat the women when they found them trying to sell on the streets in Sapa. Yet making and selling souvenirs to tourists is one of the few ways many of the uneducated women in the countryside of a developing country can earn a living. Pestering tourists on the trek is safer for the women who need to sell their souvenirs to survive. 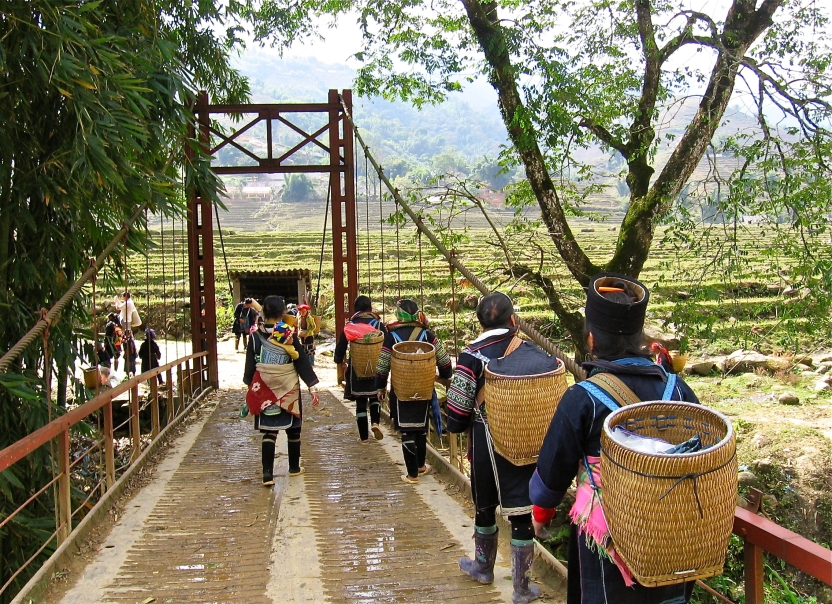 We had been playing drinking games and enjoying local rice water – or ‘happy water’ as we all called it. But the atmosphere in the room dramatically changed as we listened quietly to our guide who then told us about the frequent abductions of women in her local village.

Zi lives in a village just outside Sapa and she estimates about three women from her small village go missing every single year. She said that women and girls are most vulnerable to be kidnapped during the evening or at night when walking alone. It is possible that when these women walk home after a long day’s work in the rice fields or selling to tourists in Sapa that they can be abducted and taken over the mountains and across the Chinese border, never to be seen or heard from again.

One night Zi’s aunty went missing. Nobody has heard from her in years. She suspects her aunty was transported to China and was forced into becoming a Chinese man’s wife. She is just one of the 800,000 women that the US State Department estimates is trafficked across international borders each year. But this figure doesn’t include the millions of victims around the world who are trafficked within national borders.

As we kept talking, Zi revealed that many husbands beat their wives who fail to bring home enough money from tourists. While I don’t doubt that this does often occur, it is important that we recognise that this perception can’t be extended to all the village men, as some of the other tourists we met in Hanoi suggested.

We all looked at each other in shock. I think we all felt guilty that we had ignored the local women that day.

The next day our group sat down for lunch after hours of hiking. As usual, the women hovered around us, shoving hand made bracelets, bandanas and even small, traditional musical instruments in our faces. It was quite hilarious to watch the women attempting to sell jewellery to the guys in our group. We had told them no so many times, and yet the women never stopped trying.

The next day we were more friendly with the local women – we shared plenty of laughs with the women, we took photos with them and we made the effort to smile and thank them when they offered to help us down the mountains. I think everything Zi had told us helped us to understand these women and make the most of the experience.

None of us had bought a single thing from the women … until at lunchtime somebody finally said yes.

It was a sudden frenzy. The women immediately surrounded us excitedly and we all ended up buying something. The only problem is that once you buy from one of the women they then persuade you to buy from their friends too – “you buy from my friend, why not buy from me?”

It took about an hour of continually repeating “no more” until the women then went away, huddled together and divided the money between themselves. We must admire that in a community where there is so little, the fact that the women share their earnings with each other is truly inspiring.

I bought a pink bandana from one of the women. I had paid 200,000 VND – about $AU10. I showed my new pink bandana to my Polish friend, Ola, and I was surprised when I was met with shock.

I was angry at first. Like many other travellers, I hate haggling because you feel like a horrible person for demanding a lower price from people who are much worse-off yet you resent them for taking advantage of you. But honestly, what does $10 really matter? One good sale for these women could potentially buy them more food for their families or even medicine for when their children are sick.

I don’t think we should pity these women. I think we should admire them for their strength because I’ve never before witnessed with my very eyes such resilience. How many of us can say that we have hiked up and down mountains for several kilometres and dealt with unpleasant tourists on a daily basis for the sake of earning a few dollars?

Too many travellers I speak to have a negative view of street sellers in the developing world. I understand that locals often take advantage of tourists. But the women of Sapa taught us to open our minds and not treat street-sellers like inferior dogs simply because they irritate us.

I’m simply suggesting that when we travel we put ourselves in their shoes. If pestering tourists for money was your best chance at a better life for your family and community, would you do it? I know I probably would. 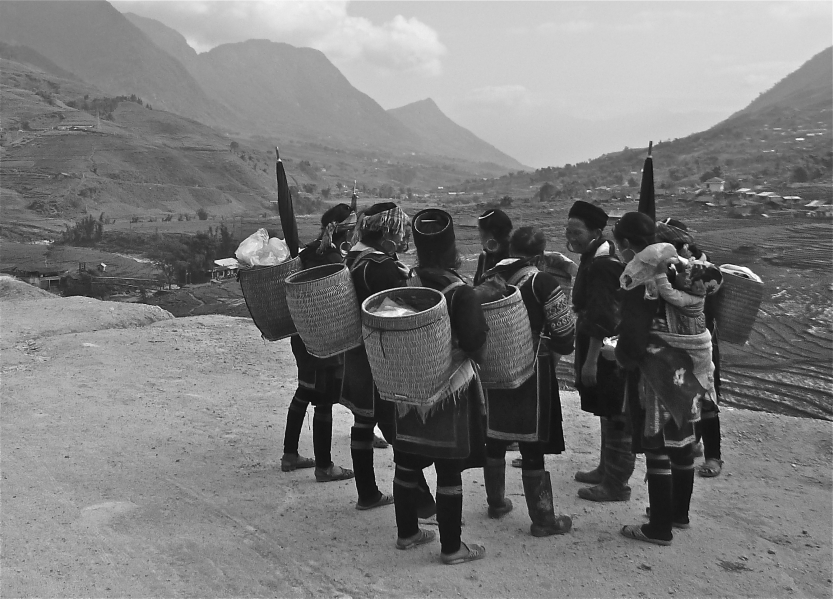