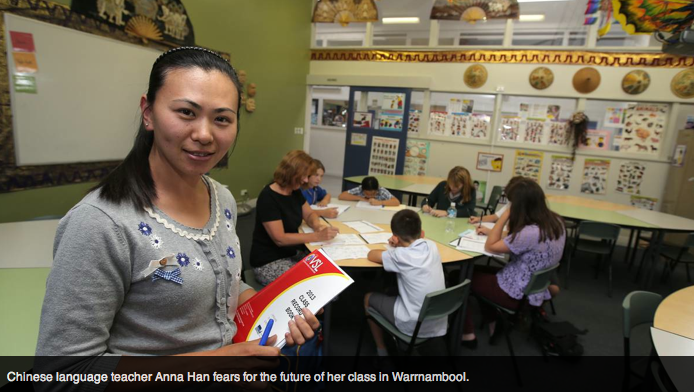 A WARRNAMBOOL language centre is concerned it will face closure if more students don’t join its classes.

The Victorian School of Languages’ Warrnambool centre supervisor Vince Gleeson said the centre would be audited to determine if class sizes were viable for continued funding.

The centre, which has been running classes for nearly a decade, holds French, Italian and Chinese lessons for students in years 1 to 12.

Mr Gleeson said he would be informed during term holidays if classes had enough students to continue.

“It would be a huge loss if the classes stopped,” he said.

Mr Gleeson said there was about 10 students for the Chinese class. French and Italian classes had less than five.

He said about 15 students for each class would ensure the centre remained open.

“It would be a pity if it closed because it’s such a great opportunity for students from different schools to learn a language such as Chinese Mandarin, especially because there aren’t many schools in Warrnambool that teach Chinese,” she said.

The weekly classes held at Warrnambool College are government-subsidised.

“Classes only cost $70 for the year for two hours a week — it works out to be something like $2 an hour, so it’s very affordable,” Mr Gleeson said.